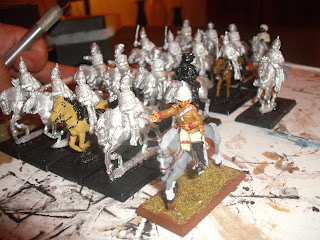 Colonel Hammond and the complet Eskadron (in past Major Wickers, second in command) 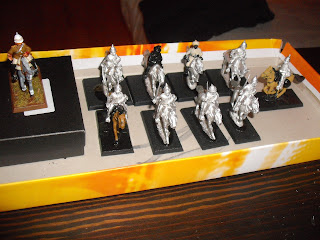 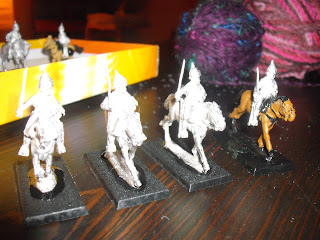 Swords are drawn to attack. 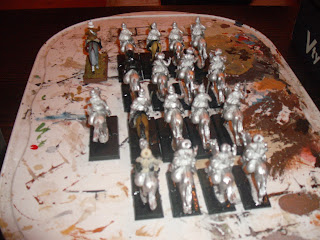 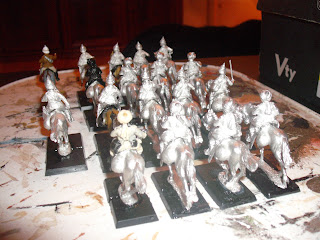 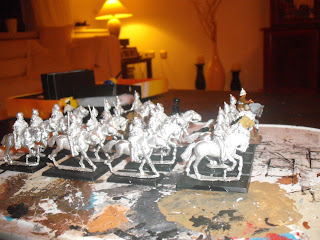 The Corps of Guides

My first thought about the regiment crossed my mind, if I first see the film „the far pavillions“. The british-indian Unit there is form in the “Corps of Guides” in Nothern Indian Frontier.
And now i want to paint the original Corps. So i have change the discriptions. 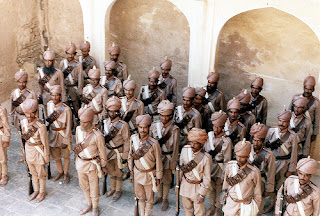 The most units of the corps are part of the British Indian Army and Indians, most Moslems.
There you can take a look at them. 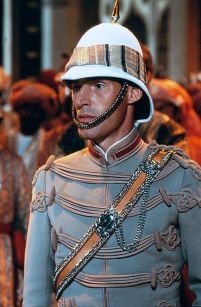 This is the First Gala Dress Uniform of the Corps of Guides. We see an Brevet Captain of the Corps. 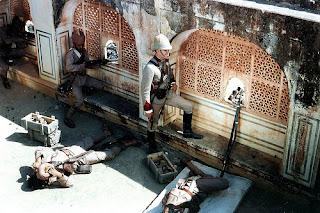 This Lieutenant weres the Standard Battle Officer Uniform. The Pit helm in Command Khaki, not white (like the Captain above). The dresses are red. 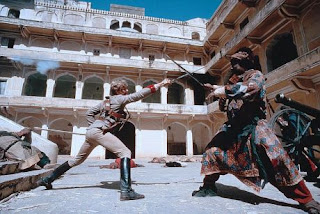 The Leftenant again (withaout the pit). 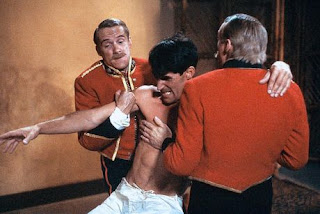 Old officers from an traditional british guard regiment are "fighting" there companien from the Corps of Guides.

There are some description from Wikipedia:
• The Corps of Guides was a regiment of the British Indian Army. It was a unit with a reputation for innovation, individual initiative, endurance, daring and toughness in battle.


History
The brainchild of Sir Henry Lawrence, the Corps had modest beginnings. When it was raised in Peshawar by Lt. Harry Lumsden in December 1846, it comprised just one troop of cavalry and two companies of infantry. However, it soon grew a fair deal in size and whatever it lacked in quantity, it never lacked in quality. It maintained the quirky 'cavalry and infantry combined in the same regiment' format for many years, and even when split into two separate components, the name lingered in both elements. The Corps of Guides was always part of the crack Frontier Force brigade and if the Frontier Force itself developed into an elite formation, then the Guides were the premier unit of the premier force. They were famous for being the first unit in the Indian or British Armies to dress in khaki. They were soon followed by the other Frontier Force regiments. Like the Greenjackets of the Napoleonic wars, and the SAS of our own times, they were often used in small detachments, usually supported by other reliable troops such as the Sikhs and Gurkhas, to act as 'force multipliers', due to the resourcefulness and courage manifest throughout their ranks.

Throughout its history the Corps was reorganized and renamed. It was known variously as:

In 1911 the cavalry and infantry components were designated as such. The cavalry then became, successively:-

This must be noted, differentiated and distinguished from other units of other armies (such as the 1st Battalion of the East Bengal Regiment of Bangladesh) who have "awarded themselves" the red piping!

The Guides are the subject of George John Younghusband's book, The Story of the Guides, first published in March 1908.


Creating an elite
The first home of the Guides was at Kalu Khan, on the Yusufzai Plain, in the Peshawar Valley region. The first action was at Mughdara, in the Panitar Hills. Within two years, the small force of Guides had established a name for itself, under Lumsden, its founder and sole British officer, such that when the Second Sikh War broke out in 1848, the unit was given authorisation for a three-fold increase in size, to 6 companies of infantry and 3 troops of cavalry.

The Corps of Guides became established as the garrison unit of a key post on the frontier, the new fort of (Hoti ~) Mardan. In 1857 the unit was called urgently to help relieve the Siege of Delhi. In just over three weeks the Guides marched nearly six hundred miles during the hottest month of the year, crossing five great rivers and fighting four small actions. The march coincided with the month of Ramadan meaning that the muslim soldiers in the force could neither eat nor drink during the hours of daylight. On arrival at Delhi, the force of 600 Guides were almost immediately called upon to join the defence of the city. Men who had just completed a march of some 580 miles were thrown into a battle of such intensity that no fewer than 350 of the 600 became casualties within an hour of their arrival in Delhi. This action established the reputation of the Corps of Guides throughout India as a corps d'elite. 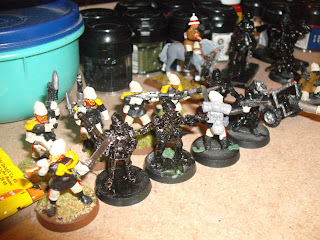 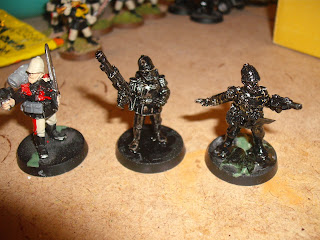 This both images showing the next work on the first and second squad of veteran platoon ore Special Force Command. There are some conversions. 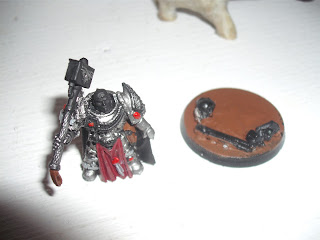 This is the first image of Inquisitor van Dorke. 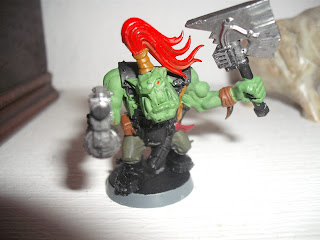 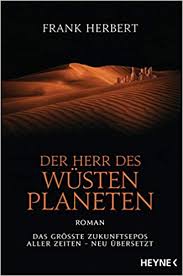